This app takes pictures of anyone trying to access your device. Big Brother is the only iPhone/iPod Touch app that takes a photo if the user presses the home button!

Easy to use!
• Start Big Brother.
• Change your passcode.
• Set your email address.
• When you're finished, press LOCK.

*Big Brother will only work on devices with a forward facing camera.

Feel free to email me at support@danielamitay.com
MORE 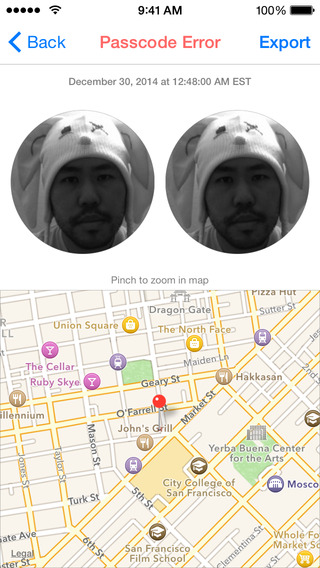 Almost the only app that's security that works

This is the only app that's worth downloading for security

Ok so this works but just not like you would think from reading the directions. It does not work through your phones default lock a screen, rather it sets up a fake lock screen within the app, and once that fake lock screen is on you cane tee a correct password to gain access to the chart that shows you who has tried to log in, but you still can not use other apps on your phone until you deactivate "guided access," because guided access locks your phone in to a single app. The key is to set up guided access. Then once you open this app you have to tripple click the home button and start/stop guided access every time you want to use this app. So basically it will take pics and email you when someone logs in or fails to log in, but only from the dummy lock screen. It doesn't work for monitoring app use because guided access needs to be deactivated for anyone to exit this program, and if they have your guided access password then they could bypass this entire app anyway. So just to be clear, you have to set up this app and guided access which is already a feature of your iphone. They both have passwords so don't get confused, you will have to have a guided access password and a big brother security password. Don't forget tripple click to get to guided access within this app once you have set up guided access or else it will not start working. Also you have to tripple click to deactivate this app or you will think you are trapped in this app because guided access will keep you from being able to exit to any other app. I really like this app even though it does not exactly work as you would expect. It takes a silent pic with no flash so people don't know they are being photographed as they guess your password. The biggest downfall is that if they guess right they will see the log of the pictures of their face, however, they still won't really have access to your phone unless they can also guess tour guided access password. The other downfall is that the lock screen looks slightly different than the default lock screen so if someone knows about this app then they will probably be able to tell it is running.

I love this app caught my boyfriend red handed going through my phone while I was sleep!!