2 millions players. Rank #1 in 46 countries.
Wake up your phone and turn him into a hero!
Choose his face, take care of him and go fight
other phones in your city and your friends!
THE 1ST EVER PHONE-FIGHTING GAME.

Read some testimonials from our players and the press :

• VentureBeat :
"A handy way to settle disputes over pizza toppings with your friends :)"

• Great fun - 5/5 Stars
By Bigarobas- 20 July 2013
"I just had to play every level right then. I definitely recommend this game! Easy to play, a good competition!"


THE BEST MULTIPLAYER FIGHTING GAME
• Battle millions of iPhones/iPads/iPods, in crazy fights!
• Create a fun and unique face for your iPhone, with over 3 billion possibilities!
• Take care of him, feed him, play with him… like a Tamagotchi!
• Collect 300+ crazy weapons!
• 400+ missions on 99 levels
• Challenge your friends, people around you and around the world LIVE!
• Play the mini-game Lucky Bubble to win tons of prizes and rare weapons!
• Multi-player and solo game modes allow you to battle your friends and other avatars.

Blending Action, RPG, social and multiplayer gameplay, Phone Fight will turn your mobile into a true hero! Equip him or her with fun and powerful weapons, and your avatar will become the best of your city, your region, or even of your Facebook friends’!

Get one of the best multiplayer RPG games. Simple and addictive, this social online MMO is full of action and strategy. It will turn your mobile into a tiny monster gladiator. Enter the arena with your avatar to start the first phone championship! The great tournament has begun! And don't forget to invite your friends to make alliances! Make the war more fun: Use Facebook to find your friends’ avatars, challenge them and become the best!

For all the fans of RPG, MMORPG and all of those who like a challenge and taking care of a virtual pet!

Any difficulties? Suggestions? Write us to help us improve Phone Fight : support@mobinlife.com 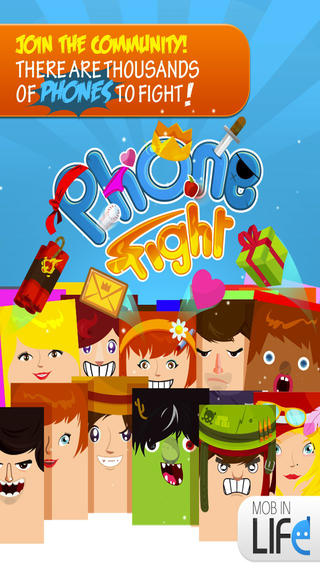 Thank to all of you for your feedback!

Please continue to send your comments to Victor (support@mobinlife.com) and visit him on Facebook, so that we can work at better improving Phone Fight.

Enter the biggest phone battle in the world !

After your feedback, we have improved:
- New weapons
- New faces
- New missions
- Better leaderboard: Fight to be the Master of your city EVERY WEEK!
- NEW: contests and special events. Check your messages in Phone Fight !
- NEW: Skill Point Packs, to improve your Phone's skills !

After your feedback, we have improved:
- NEW: Skill Point Packs, to improve your Phone's skills !
- NEW: contests and special events. Check your messages in Phone Fight !
- Go fight the BOSS virus in new missions.
- Better leaderboard

After your feedback, we have improved:

I did this only for the sims